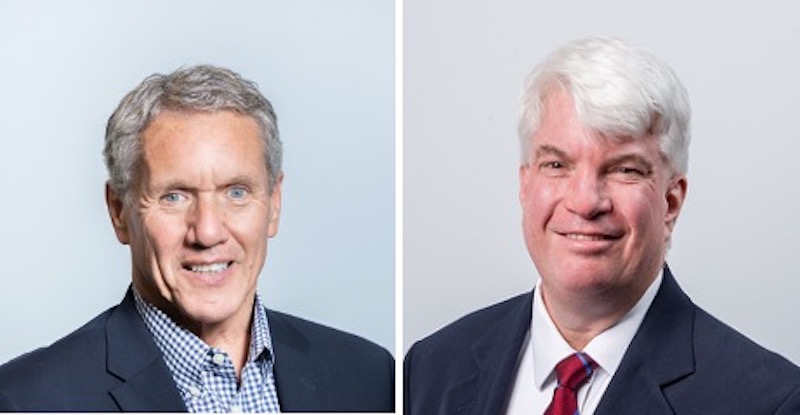 Earlier this month, Sense Neuro Diagnostics signed a $2.43 million contract with the U.S. military to advance the development of its rapid, non-invasive brain scanners for testing, diagnosing and monitoring traumatic brain injuries (TBI) in the field. To learn more about the tech and how the contract came about, Cincinnati Future spoke with Geoff Klass, Sense Neuro’s CEO, and Dr. George Shaw, who is responsible for the technical and scientific development of the Sense device.

How did the idea for the device come about?

Shaw: The concept for this device started around 2011. I was sitting at a bar table at LAX airport, waiting for the red-eye back to Cincinnati, from the International Stroke Conference. My colleagues — an emergency medicine and neurocritical care doctor and a couple of neurologists — were brainstorming about what we could do to non-invasively monitor the brain and the neuro ICU in particular.

From a clinical standpoint, people can get hemorrhagic brain injuries from stroke and traumatic brain injury (TBI). The brain is like any organ: If you damage it, then it can bleed. A hemorrhage ends up pushing on things you don’t want to get pushed on. The problem with a regular clinical exam is that it can’t be done if the patient is sedated, paralyzed and intubated. It’s a lagging indicator. So by the time the hemorrhage expands, the damage has been done. We really don’t have any device or technique that can non-invasively monitor the brain.

That’s the focus of our first device and part of the focus for the military device we’re developing. We took our concept to the lab, obtaining some early funding from the National Institutes of Health (NIH) and the University of Cincinnati. We are currently developing it for three indications, and hopefully we’ll be deploying this in the near future.

How did the military contract happen?

Klass: We presented our technology at an event called MedTech Innovator Military. We were one of 20 out of thousands that were accepted to present [at the event]. We won the competition. Even though the judges were not military, we got the attention of the military. They instructed the Medical Technology Enterprise Consortium (MTEC) to issue an RFP, looking for a company that can do the type of product that we’re proposing to build. It went into a competitive RFP process, budgeting and all of that, and we won that the contract. We’ve been working on this for well over a year — probably like 15 months — to get to this point, so we’re really thrilled.

What will the military contract consist of?

Shaw: We will develop a variation of the technology used in the military for the detection and the monitoring of TBIs. It will be used in the war theater. If a soldier is hurt—for example, after an IED blows up a Humvee or a bomb goes off—then they can immediately put this device on top of that individual’s head. It will determine if there is blood present in the brain in 2.5 seconds. If it’s an active bleed, then the device will flash red, so they’ll know they better evacuate this soldier real quick. By the time the patient arrives at the field hospital, all of the information has been collected, and physicians know exactly what’s going on.

It’s an 18-month contract, and it starts today. We’re kicking it off with an afternoon meeting with the military. We will also leverage some of the research in our pivotal trial for FDA approval of our monitoring device.

Can you talk about some of the advantages of launching a company like this in Cincinnati?

Shaw: I think Cincinnati is an undiscovered country for developing health technology. You’ve got a large pool of talent. You’ve got a well-rounded university [University of Cincinnati] and health care system. The city is excellent for clinical trials, for pediatric care and for trauma care. We have a very rich environment, and folks who have the knowledge base to push the medical device field forward in particular. It’s kind of an undiscovered country and people need to discover it.

Klass: In Cincinnati, you have a large amount of support business-wise. Queen City Angels has been our biggest supporter since the company has been around. They’re just a great group of people to work with. Innovation is something that Cincinnati has taken to heart, and they put their money behind their goal. Cincinnati has built the infrastructure to make that happen.