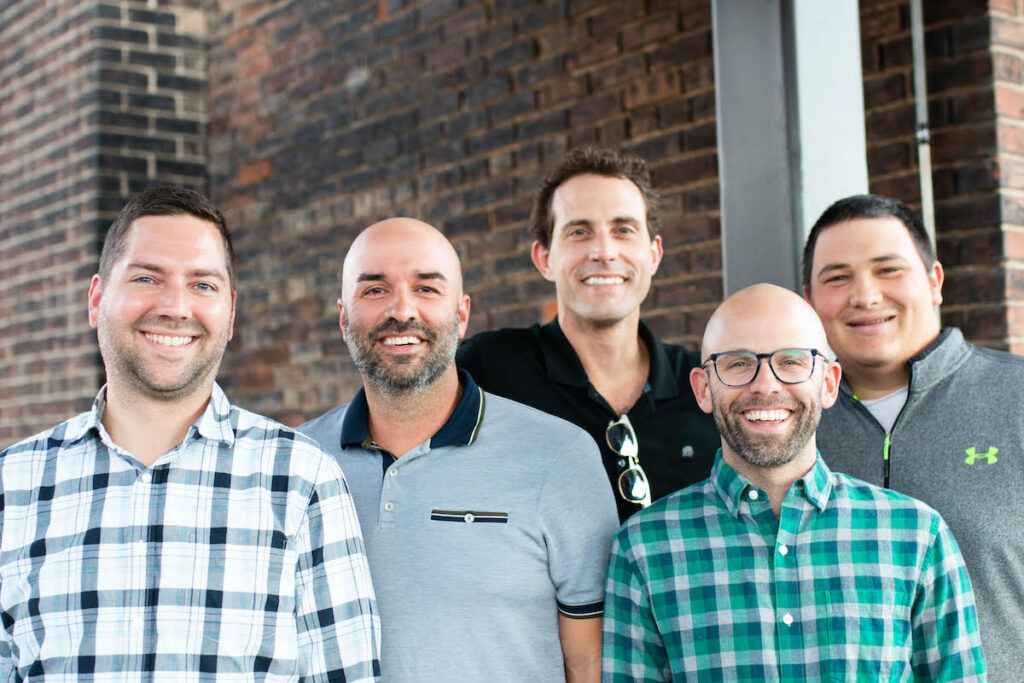 Bob Gilbreath, third from left, with the Hearty team

A great exit for a Cincinnati company quickly led to the launch of another one, a professional recommendation network where great people help each other find opportunities. We spoke with Bob Gilbreath, CEO and co-founder of Hearty, about his newest venture.

How did Hearty come about?

Gilbreath: My partners and I had an influencer marketing technology company called Ahalogy, which we sold to Quotient, a West Coast software company. While we were finishing the sale, we thought, We’re entrepreneurs. We love working together. Let’s do it again.

How did you decide on the idea for Hearty?

Gilbreath: We created a classic Google spreadsheet of different, crazy ideas but kept coming back to two things. One was we really wanted to go for it. We had some money in the bank and the ability to take some risks. The second thing was that we wanted to do something we find really meaningful. We kept coming back to our passion for building teams, which has been a key to our success at previous companies. The key to building teams is finding great people, and achieving that has fallen to networking.

You mean a traditional networking model?

Gilbreath: Yes. Let’s say you are looking to hire a new leader for your client success team. You would look for referrals from other people you already know. You would think about who is great at this. But what if that’s the 10th thing that person has to do that day, and therefore it isn’t a top priority? The only technology we’ve had to help is LinkedIn.

LinkedIn has a lot of great things going for it, but it has become harder to see who really knows each other. People accept connections now if they’ve never even met, or maybe if they only met 10 years ago at a conference.

You decided to create something that was centered around recommendations rather than just connections.

Gilbreath: Yes. Instead of a connection, we’re asking you to recommend the people you know well and trust, and then recommend them on Hearty leaderboards.

What are the leaderboards?

Gilbreath: We started off in Cincinnati and our whole key has been with our own network. As members come in, they’re able to invite the people in their network as well. Now we’re starting to grow organically, getting footholds in other key cities like Columbus, Cleveland, Chicago, Indianapolis, and Louisville.

What have you learned from the launch?

Gilbreath: With our platform, there’s a high appeal toward the people who believe in networking. Super connectors in certain industries like consulting or sales, or pockets where there are natural communities like software developers who tend to know each other and stick together. If you’re starting a business, finding that right person is so key. You probably don’t have a big recruitment team. You may also have tons of people applying for a position. That’s why relationships are more important.

Gilbreath: A few months ago, we did a pre-seed round of $1 million. That was a mix of our own money and some angel investors, along with two of the institutional investors with whom we partnered for Ahalogy.

What advantages does Cincinnati offer for a startup?

Gilbreath: Cincinnati is a cross section of the country — not too big, not too small. In Cincinnati, we’ve got a critical mass of relationships. We can get a feel for the impact we’re making. Numbers are one thing, but we hear people talking in a city this size. Procter & Gamble has a great history of rolling out products in Cincinnati as a test market.

We’ve also got great leadership and champions here, like Pete Blackshaw (CEO at Cintrifuse). The whole team at Cintrifuse looked at early versions of our product, giving us lots of feedback and helping us build relationships. Things launched in San Francisco tend to go really quickly, but they don’t necessarily work their way through the rest of the country. Cincinnati gives us the more representative sample, not kind of a bubble niche.