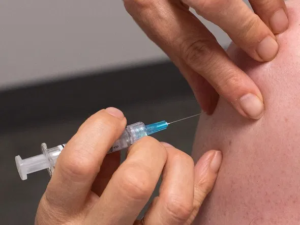 A Cincinnati biotech company, Blue Water Vaccines, has raised a whopping $7 million in seed funding to develop a universal flu vaccine. If that sounds like a lot of cash, here’s why: As everybody knows, getting a flu vaccination is a pain in the … arm. You have to get one every year, and current vaccines only defend against certain strains of the flu, making them only about 50% effective. A universal vaccine could change all of that, while saving millions of lives.

Blue Water Vaccines landed the funding after obtaining exclusive rights to commercialize the treatment originally developed by theoretical epidemiologist Sunetra Gupta and virologist Craig Thompson at the University of Oxford. (We assume Dr. Gupta theorizes on epidemiology as opposed to theoretically being an epidemiologist.)

If successful, the universal vaccine will prevent all strains of the flu and will need to be administered only once instead of every flu season. If we were theoretical epidemiologists, we could probably explain this breakthrough using words like “antibodies” and “immunity,” but we’re going to be honest and say it is magic caused by smart people doing science stuff. The company’s target date for a trial is next year.